Artistic roof garden accessible for all 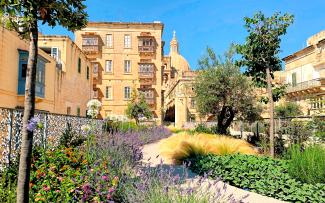 The Valletta Design Cluster offers a roof garden paradise against a historical backdrop that is open to the public. 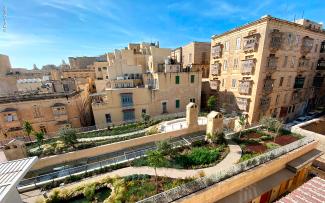 The roof garden covers an area of 495 m² and it connects the parallel buildings by two bridges. 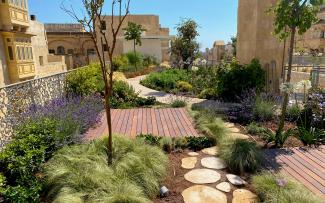 All surface designs are possible using the ZinCo system build-up “Roof Garden” as a base, in this case the seating area with wooden planks and a row of stepping stones made from natural stone. 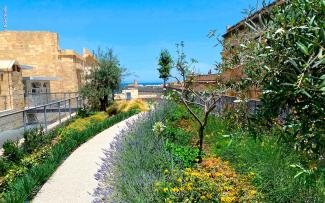 The winding pathways through the magnificent vegetation are a feature of this roof garden. 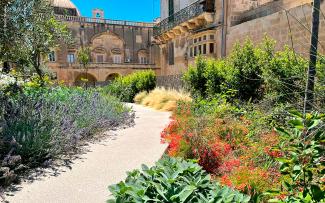 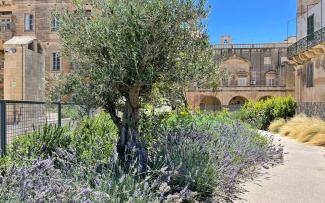 Primarily indigenous vegetation is used to create the image, for example, olive trees and lavender. 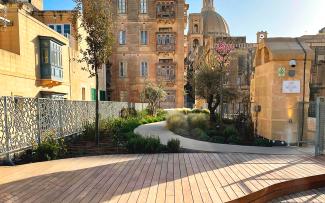 The tiered platforms of the theatre space are made of wooden planks on a metal substructure. 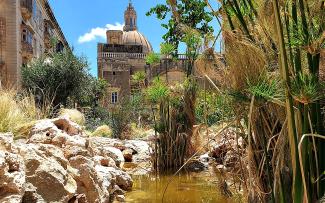 The roof also has a magical natural pond – from a technical point of view this is not a problem above the drainage and water storage layer Floradrain® FD 40-E which covers the entire area. 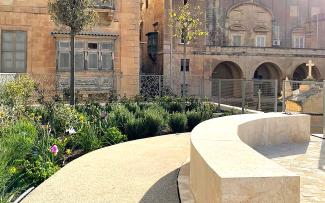 The natural stone of the benches is from a local quarry. 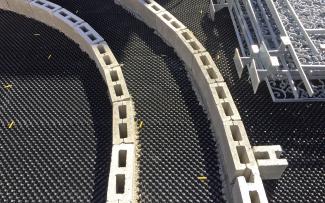 The drainage and water storage element Floradrain® FD 40-E, fitted across the entire area, is used as a permanent formwork for the pathway made of concrete hollow blocks. 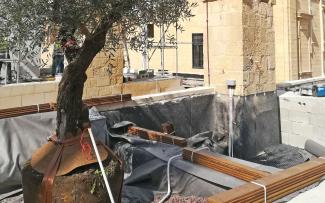 With the tree anchor system Robafix®, the tensioning straps are attached to three anchor points of the grid element, thus permanently securing the root ball. Thanks to the laid power cables, the olive tree will be beautifully illuminated later. 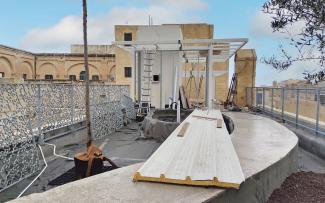 Thanks to the tree anchor system, Robafix®, the trees are already anchored to prevent them moving, while work on the pavilions and the pond is still in full swing. 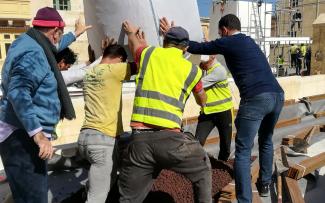 The substrate is lifted onto the roof by crane and is distributed there directly from the big bags. 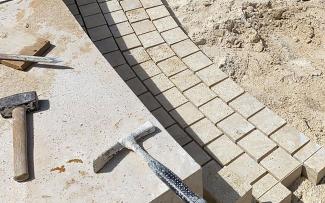 Using the ZinCo system build-up “Roof Garden” as the base, any surface finish and design is possible.

950 trees, shrubs, ground cover plants, climbing plants, flowers and grasses across a roof area of 495 m² on a 400-year-old building – the design of the roof garden on the Valletta Design Cluster is as rich in detail and artistic as the entire infrastructure project in Valletta, Malta’s city of culture. The Design Cluster is the new heart of the artistic and cultural scene in Malta and the inspired roof garden is open to the public as a community space. The diversity of magnificent plants is in harmony with the elements wood, natural stone and water – all with the ZinCo system build-up “Roof Garden” as a base. A virtual paradise dedicated to relaxation, strolling and new inspiration.

Thanks to its cultural richness, Valletta, the capital of Malta, has been a UNESCO World Heritage Site since 1980. The city is a living monument and marked by the Order of St. John, which has been based there since 1530, which is why it’s also called the Order of Malta. Designated European Capital of Culture in 2018, there has never been a smaller Capital of Culture than Valletta with its population of 6,000 within one square metre. Within this context, the city developed a number of architectural and infrastructural projects including the Valletta Design Cluster, which was officially opened in March 2021. The total investment sum for the project was 10.4 million Euro and it was funded from the European Regional Development Funds. The two agencies behind the project are the Valletta Cultural Agency as the public cultural organisation and the Restoration Directorate of Malta, as the most important state agency with responsibility for the execution of restoration and rehabilitation works on historical buildings. The Valletta Design Cluster building is from the 17th century and consists of two parallel buildings around a central, elongated courtyard. The building has had various uses over time: originally it was the main abattoir (in Maltese: il-Biċċerija) for the Order of St. John, it then provided local authority housing, and during the war it was a barracks and a factory, and later on it was a bakery. Today, it is a multi-functional, creative community space that can be used by artists, students and start-ups based on an affordable system of membership. It is a space where people and ideas come together.

With an area of 3,212 m², the Valletta Design Cluster is home to 15 ateliers and studios (co-working spaces) and two project labs (maker spaces) that are fitted with tools and machinery for working on metal, wood, plastics and textiles. In addition, there is a conference room, a number of meeting rooms and lounges and a top-class kitchen (food space) for culinary creativity with an original oven from the period during which it was used as a bakery. The courtyard can also be used as a work and relaxation space, for gatherings or for exhibitions. The main eye-catcher here is the 28 m² vertical greening with over 1,200 plant pots. The many different design aspects of the 495 m² roof garden include lush green spaces. This is the first roof garden in the whole of Valletta that is open to the public.

An entire world on the rooftop

The roof garden of the Valletta Design Cluster was created under the direction of the Restoration Directorate and Tetsuo Kondo Architects from Japan. The main contractor is the architecture and construction company, Doric Studio/Living Walls in Malta which has been working with ZinCo GmbH for a number of years in the area of green roofing. The planners designed the roof garden with a winding pathway that elegantly connects both buildings over two bridges. Among the lush greenery of the intensive green roof there are a number of seating areas for social gatherings, pavilions for meetings and workshops, a small theatre space and a natural pond with papyrus plants, water lilies and freshwater fish. With the ZinCo system build-up “Roof Garden” installed across the entire area, anything is possible technically – be it a water feature or natural stone benches or pathways made of wood, pavers or other materials. The entire area is divided into 270 m² of non-planted and 225 m² of planted space with primarily indigenous types of vegetation.

The technology is crucial

The correct technology is crucial for ensuring an excellent result – it’s not only the artists that know this but the craftsmen too. With the green roof, this is the most appropriate system build-up for the project, which was professionally installed by the Maltese company, Derek Garden Center. The ZinCo system build-up Roof Garden was installed on a bituminous, root-resistant roof membrane, using an additional root-barrier WSB 100-PO and the Protection Mat ISM 50. This synthetic fibre mat, highly resistant to mechanical stress, and capable of storing water and nutrients, is the correct choice for the intended intensive green roof with pathways. The next layer was the drainage and water storage element Floradrain® FD 40-E as the core piece in the ZinCo system build-up. The 40 mm high element made of thermoformed recycled polyethylene can store water in its cells and drain off excess water to the roof outlets thanks to its underlying channel system. Even when selecting the subsequent filter sheet, system filter TG was chosen, a version that is highly resistant to mechanical stress. It is made from thermally consolidated polypropylene and is used to prevent fine particles entering the drainage layer from the overlying substrate. Lava rock, suited to the required intensive green roof vegetation, grain structure 10–16 mm was then installed on the roof as a sub-substrate, with a depth of 50 cm. This was followed by a 20 cm deep top layer with the finer grain structure 0–10 mm. This is comprised of approx. 70 % lava and 30 % pumice stone in addition to organic materials such as peat, compost and nitrogen fertiliser.

For the intensive green roof, it was primarily indigenous plants that were used and that are adapted to the Mediterranean climate: Olive tree (Olea europaea spp), carob (Ceratonia siliqua) and holm oak (Quercus ilex) are present, as are Rosemary (Rosmarinus officinalis) or Viburnum (Viburnum tinus) among the shrubs. Examples of perennials are paper reed (Cyperus papyrus), common sage (Salvia officinalis) and myrtle (Myrtus communis). A precise plan, in itself a veritable work of art, was prepared for the arrangement of the 950 trees, shrubs, ground cover plants, climbing plants, flowers and grasses. The groups and various rows of plants create a harmonious image, reflecting the winding form of the pathways. There are rows of plants along all of the roof edges. Even though the plants selected are adapted to the local climate, an automated irrigation system using driplines was also installed.

As strong as a tree

On a rooftop, trees are exposed to high forces from wind pressure and wind suction, which is why they need to be anchored permanently so that they cannot move. The planners didn’t hesitate to select the ZinCo tree anchoring system Robafix® as it doesn’t require the roof membrane to be penetrated and it’s easy to use. The 1×1 m grid elements made of recycled plastic were laid in the sections set out for the trees and on each element three anchor base plates made of aluminium were positioned to accurately match the diameter of the root ball. The tension belts were then fixed to these anchor points around the root balls. This therefore prevents the contraction or extraction of the anchor points, enabling the root balls to be permanently stabilised.

The wonderfully diverse Valletta Design Cluster is a platform for design, innovation and projects with a cultural and social impact. It is a space for dialogue and inspiration, and not only for artists. As it is open to the public, everyone has easy access to the cultural and artistic scene in Malta and to the spectacular roof garden that serves as an oasis for relaxation and well-being for everyone. And that’s a big win – just like this one: Doric Studio were nominated with Valletta Design Cluster as finalists for international competition “CITY’SCAPE City_Brand & Tourism Landscape Symposium & Award 2021” and awarded in the category “City Landscape”.