Edible park instead of car park 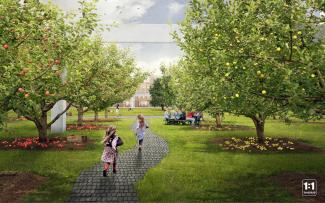 Fruit trees are the true protagonists in the concept of the landscape architects. © 1:1 Landskab 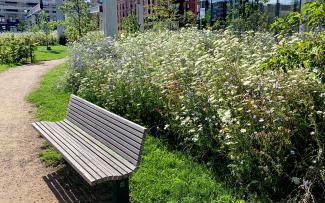 Grønttorvet Park is an incredibly important local recreation space for the entire residential district. The seats are an invitation to linger a while. © Malmos A/S / ZinCo 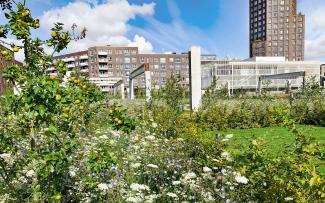 The white blossoming “wild carrot” and the blue blossoms of the “common chicory” surround the apple tree here, which is already appealing with its wonderful fruit. © Malmos A/S / ZinCo 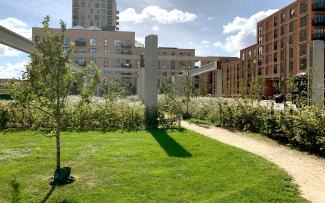 For the residents, having a park right at their front door is invaluable. © Malmos A/S / ZinCo

Strollers meander leisurely among the apple trees and the pillar relics from the old market halls. © Malmos A/S / ZinCo 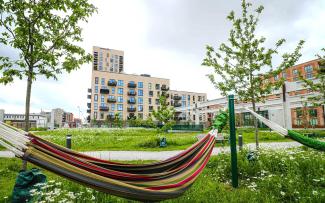 Do you fancy just chilling in the hammocks? © FB Gruppen A/S 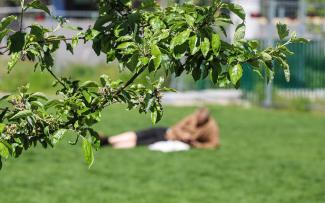 How nice it is to lie in the grass. © FB Gruppen A/S

The little apples need another while to ripen before they can be harvested. © Malmos A/S / ZinCo

Luckily, all parked cars are hidden below the magnificent greenery. © Malmos A/S / ZinCo 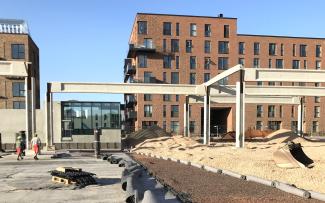 Stable structure: the FD 60 neo elements are filled with Zincolit® Plus and covered with the System Filter SF. The actual substrate layer for the plants is installed over the system filter. © Malmos A/S / ZinCo 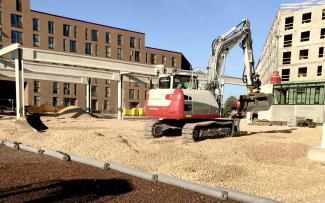 Construction vehicles can be used on the stable ZinCo system build-up without a problem. © Malmos A/S / ZinCo

The former wholesale fruit, vegetable and flower market in the Valby district of Copenhagen will be replaced by the year 2025 by a modern residential area with approx. 3,000 mixed use apartments, in addition to shops, cafés and offices. With an area of 23,000 m², Grønttorvet Park is the green heart of the project, covering the underground car park that is 9,000 m² in size. 250 fruit trees are a tasty reminder in the true sense of the word of the former use of the site, as visitors to the park can pick the fruit. Extensive lawns for playing and picnics, space for relaxation and meeting neighbours – all absolutely invaluable in the middle of what is otherwise a densely built-up area. The concrete pillars are incorporated into the multi-functional ZinCo system build-up as relics of the former market halls and it seems they will soon be overgrown by the lush greenery.

Literally translated, the Danish word “Grønttorvet” means “green square”. Very apt then as now. From 1958 to 2016, Grønttorvet in the Valby district was the go-to market for Copenhagen’s florists and greengrocers and was visited on a daily basis by buyers from over 2,700 retail businesses. As the location had become too small, the market operated more recently in Høje Taastrup, a site outside of Copenhagen. Revitalising this vacated space in Valby became a mission of supreme importance.  A new and modern residential district was to be created here. One of the declared objectives was to create affordable living space. The new residential units were also intended to be affordable for the average income. That has been achieved with 3,000 apartments in a mixed development consisting of owner-occupied and rental apartments and shared residential units, and apartments for the elderly and for students. At the same time, one basic goal was to ensure a sustainable and viable urban design. This involves first and foremost green building architecture and green areas within the immediate living environment. For this reason, the project development group FB Gruppen A/S opted for a greened underground car park solution instead of building multi-storey car parks in the vicinity. That is how the entire 23,000 m² of Grønttorvet Park became the centrepiece and an invaluable green space as part of the transformation of the historic wholesale market into a new, green residential district.

Beyond the central site of Grønttorvet Park, there are shared green spaces in the surrounding development: for example, green areas, raised beds and greenhouses in the courtyards and on the roofs of the buildings where the residents can grow plants themselves, in addition to greened roof terraces for use as the residents see fit. All of these small spaces and options for activity foster not only healthy living but also the social community of the residents who are of all age groups. In addition, the project developers placed great value on anything that is of importance being only a stone’s throw away from the residential district. Ideally, it should be possible to get to the childcare facility, shops, café, dining house and cultural events on foot or cycling.  The traffic concept provides for public transport, allowing private cars to disappear into the underground car park with its 383 parking spaces. This allows for a safe and green open space.

The buildings are named after the flowers that were once sold here, for example, Hortensia House, Amaryllis House and Verbena House. Even more evident than the choice of names are the high concrete pillars and braces. These relics of the former market hall were carefully removed and incorporated back into the parkland. But, above all, it is the plants themselves that are a reminder of the historic past, all the flowers, herbs, vegetables, berries and different types of fruit that are grown in raised beds, on roof gardens, in greenhouses and in Grønttorvet Park itself, and that have such a wonderful aroma and flavour. The concept of the “edible park for everyone” comes from creative landscape architects, 1:1 Landskab. The experienced specialists Malmos A/S were responsible for implementing the concept over a period of 5 months.

The basis for greening the approx. 9,000 m² deck of the underground car park was a 1 % pitched and bitumen-sealed concrete slab with applied 20 mm cast asphalt.

The first layer of the ZinCo system build-up “Roof Garden” installed on the slab is Protection Mat ISM 50, which is highly resistant to mechanical stresses, followed by the fully fitted drainage and water storage elements, Floradrain® FD 60 neo. The large water storage troughs in these 60 mm high elements were filled with the substrate Zincolit Plus made with crushed brick, therefore reaching the required compressive strength in the build-up. Precipitation is stored in the elements and any excess is drawn away safely through the underlying channels – even along very long drainage distances. System Filter SF is the next layer in the build-up and is used as a cover to ensure that the drainage function is not impacted. It prevents fine particles from the overlying substrate layer from penetrating. It is interesting to note that even local material, specifically crushed brick from the former surrounding buildings, can be prepared and re-used for the 45 cm deep sub-substrate. A further approx. 45 cm of the system substrate “Roof Garden” is then added. Thanks to the stable system build-up, which was therefore suitable for heavy construction plant, the substrate, all of 4,200 m³ of it, was easily applied and distributed with a wheel loader.

The parkland, its sides merging at ground level and totally invisible into the green growth, has a network of gently curving pathways. For these paved areas, a correspondingly deep layer of crushed-stone base with a further 3–4 cm of chippings was applied to the sub-substrate. While granite paving is applied to some parts of these pathways, other areas have kept the chippings as the surface covering in their natural appearance.

In addition to these 1,000 m² of surface covering, lush greenery accounts for a further 8,000 m². The extensive lawns are greened with pre-cultivated rolls of turf and seeds were used for the areas intended for meadow flowers. In addition, the common hornbeam (Carpinus betulus) creates certain bounderies as a hedge plant. The true protagonists in the plant concept are the 250 stately trees – apple, pear, plum – which the residents and visitors to the park are allowed and even encouraged to pick. When the trees were being planted, it was important to ensure that they were securely anchored on the roof area. To do this, steel lattices were installed over the Floradrain® elements and the root balls were fixed to them using tensioning straps. Since the successful completion of the project, Malmos A/S has been responsible for the ongoing maintenance of the entire greenery. By the way, Grønttorvet Park is currently being extended and a water feature is also planned – for even more sensory experiences and adventures.

The planners have created a unique design for Grønttorvet, while retaining its historic roots. The original idea of the edible park was to serve the physical and, naturally, also the spiritual well-being of all residents – young and old – who use this green space for play, relaxation, picnics, get togethers and just for fun.

The FB Gruppen A/S won the Developer Award 2020 for this wonderful example of what green urban life can look like. The award for Developer of the Year is one of seven awards intended for companies who are committed to sustainable building. It is awarded by the Danish construction journal “Licitatinen” in conjunction with leading players in the construction industry and as part of the Building Awards.