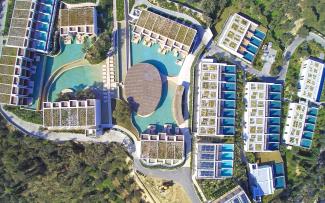 The buildings in the Olea All Suite Hotel on Zakynthos are arranged like islands around the lagoon-style pool in the centre. © egreen / ZinCo 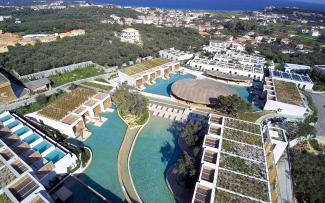 The green roofs with their Mediterranean vegetation accentuate the flowing transition to the green surroundings. © egreen / ZinCo 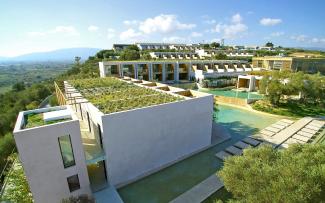 The modern cube structure of the single and two-storey residential buildings stand among olive trees that are more than 100 years old. © egreen / ZinCo 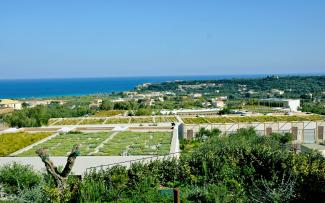 The green roofs protect the roof waterproof membrane and provide a cooling effect in the summer as they are like an additional layer of insulation. © egreen / ZinCo 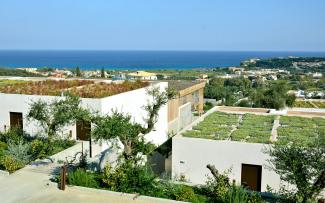 Extensive green roofs surrounded by olive trees The green along the pathways and on the roofs contrasts with the cool geometric shapes of the buildings. © egreen / ZinCo 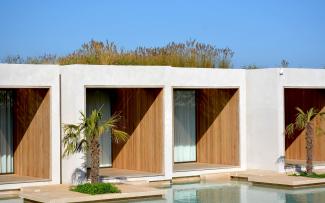 The tall grasses look like a protective head of hair in these suites with access to the pool. © egreen / ZinCo 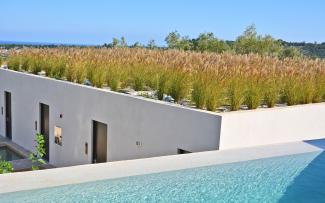 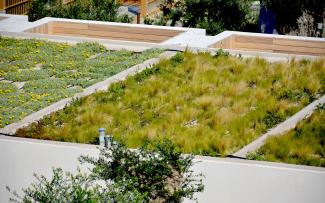 Given that each residential building houses a number of suites, the roofs are also divided up and each has different vegetation. © egreen / ZinCo 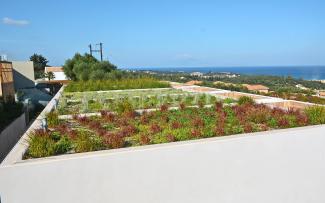 The vegetation, planted as rootball plants, soon covered the entire area, given that it is perfectly tailored to suit the Mediterranean climate. © egreen / ZinCo 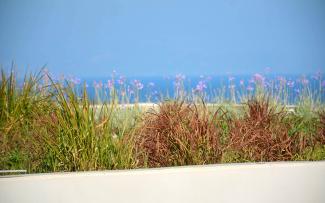 The violet flowers of the wild garlic (Lat. Tulbachia violacea) peep out from behind the grasses, giving off a delicate aroma. © egreen / ZinCo 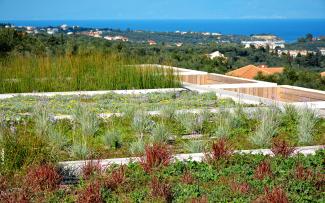 A clear pattern emerges thanks to the varying designs of the individual roof areas – with low-growing and taller species and all kinds of flowering colours. © egreen / ZinCo 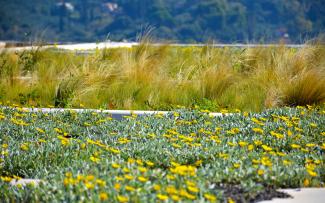 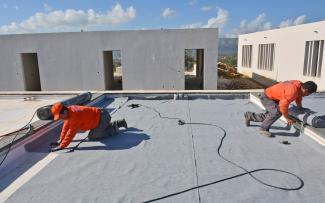 Protection Mat TSM 32, overlapped, was the first layer to be installed onto the root-resistant waterproof membrane. © egreen / ZinCo 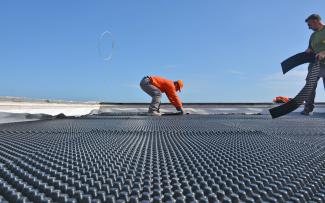 Olea All Suite Hotel on Zakynthos

The Greek island of Zakynthos is characterised by rich vegetation, which enables the Olea All Suite Hotel and its 7,170 m² to blend easily and naturally into the hilly landscape. The reason is that the roofs on all of the individual buildings – an area of about 2,000 m² in total – are greened, row for row. In between the buildings we have 4,000 m² of refreshing pool water and the almost 100-year old olive trees (Lat. Olea europaea), which give this expansive hotel complex its name. The ZinCo system build-up with Floradrain® FD 25-E adds to the charm with its Mediterranean vegetation and a wide range of mainly indigenous flowering plants.

Zakynthos (also known as Zante), with an area of about 400 km², is the third largest island in the Ionian Sea after Kefalonia and Corfu and is a major tourist destination on the west coast of Greece. The Ionian islands were the only region in Greece never to be part of the Ottoman Empire but were under western and central European rule for more than seven centuries up to 1864. The island was given the epithet “Fior di Levante” (Flower of the Levant) by the Venetians who ruled Zakynthos from 1484 up to 1797. The mild climate with its many hours of sunshine and damp winters allows for the intensive growth of olives, grapes, citrus fruits and the well-known Zante currants. Christos Xenos, a former mariner himself, recognised early on the potential of the island for tourism and has been making his mark on the hotel scene on his home island for more than 30 years now. The Xenos Hotel Group – now under the management of his daughter Venia Xenou – has a total of 12 hotels, including the new Olea All Suite Hotel. This hotel is set in an idyllic location on the north-eastern coast of the island, about a ten-minute walk from the resort town and sandy beaches of Tsilivi. As an “adults only” five-star hotel, the aim is for all guests (from the age of 12) to enjoy a relaxing holiday in quiet surroundings.

Block722architects+ based in Athens and Stockholm planned the Olea All Suite Hotel with its 93 suites across the expansive complex, in rows of cube-shaped buildings located around a lagoon-style pool. The geometric forms evoke the architectural minimalism style that developed in the 1920s, with its simple design language and lack of ornamentation or decoration. It is precisely this element that gives the Olea resort the desired sense of order and calm. The water element also contributes to the relaxing atmosphere, due to the white and earthy tones and the indirect lighting concept. In addition, ecological sustainability is important: This includes the green roofs just as much as the straw roofs of some of the community buildings (wellness and spa area, fitness studio). Natural materials such as oak, bamboo and rattan have been used for the interior design. Overall, the approach appears to be to create a combination of the internal and external world, of architecture and nature. This is achieved most successfully with the green roofs.

It’s as simple as this

egreen, the ZinCo partner company in Greece, delivered all the materials to the construction site which meant that the garden and landscape contractors, Mouzakis Nurseries, only needed 15 to 20 days to execute the green roof build-up as such without any problems. The roof areas of the buildings, with a slope 1.5 %, were already thermally insulated with 150 mm of EPS and were also fitted with a 1.5 mm thick root-resistant thermoplastic polyolefin membrane. This provided the base for the ZinCo system build-up starting with Protection Mat TSM 32, a synthetic fibre mat used for protecting the waterproof membrane against mechanical impact. This was followed by Floradrain® FD 25-E, a 25 mm deep drainage and water storage element made of thermoformed recycled polyolefin. Given its underlying channel system, this element can store stormwater in its cells and safely draw off excess water to the roof outlets. The drainage layer was covered with System Filter SF made of thermally strengthened polypropylene, preventing micro particles from penetrating from the overlying substrate layer. A 15 cm deep layer of extensive substrate, specially mixed to suit the subsequent vegetation, was applied by egreen using a mobile crane.

Given that virtually all the green roof areas are visible from the overlying suites due to the hillside location, the planners placed great value on their design. The design of the vegetation ensured the continuity of the predominant geometric structures. As each building houses a number of suites, each roof was designed with a number of distinct areas. A clear pattern was created by planting only one type of plant on most of the individual areas, piece by piece and row for row, as flat or small rootball plants. The design of some of the building roofs allowed for plant beds in three different sizes, which also highlights the cuboid optics. In addition, two buildings have solar thermal modules installed on them. The vegetation coverage was extensive after only one or two growth periods. This magnificent growth is due not only to the installed dripline irrigation system and good maintenance but primarily to the fact that the choice of plants was tailored to suit the location.

Used to wind and heat

An important factor for the success of the green roofs is the choice of plants suitable for the Mediterranean climate. For this reason, species suitable for dry conditions were chosen, for example, Oriental Chinese fountain grass (Lat. Pennisetum orientale) or Chinese silver grass (Lat. Imperata cylindrica) from the species of sweet grasses. The delicate Mexican feather grass (Lat. Stipa tenuissima) with its slender stems also makes the sea winds visible, creating a vibrant play on the green roof. We should also mention the trailing gavania (Lat. Gazania rigens var. Leucolaena) with its bright yellow flower heads and off-white leaves. This low-growing perennial herbaceous plant belongs to the aster family. The white-coloured wild garlic (Lat. Tulbachia violacea) gives off a delicate garlic aroma.

Under the Greek sun

Strolling between olive trees, carob trees and glittering stretches of water, the green roofs of the whitewashed residential suites are always in view. The green roofs are not only a visual highlight, setting the pattern, they also serve to embed the hotel complex in its green surroundings. They provide additional crystal-clear benefits, for example: protection of the roof waterproof membrane by balancing the fluctuations in temperature, enhanced sound insulation and above all, the cooling effect in the summer because the vegetation acts like an additional layer of insulation. In this way, the Greek sun can be enjoyed at any time.