A terrific tale from Tenerife 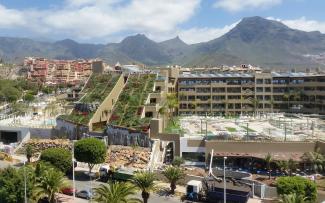 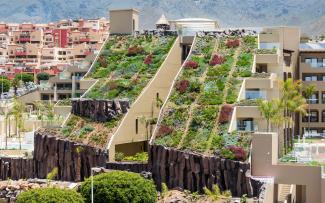 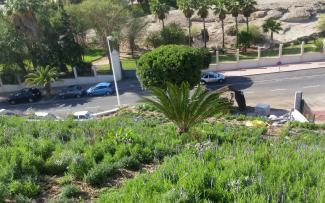 There are even palm trees on the steep roofs - thanks to special indentations in the roof structure. © ZinCo GmbH / Impermeabilizaciones Machado, S.L.U. 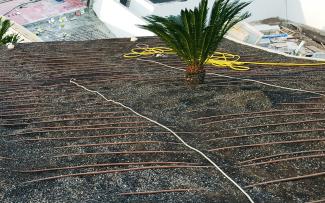 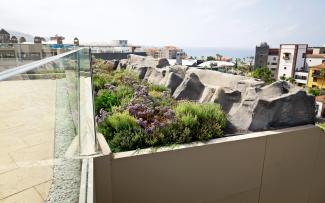 Lush growth on this roof section too - in this case lavender and rosemary are predominant. © ZinCo GmbH / Impermeabilizaciones Machado, S.L.U. 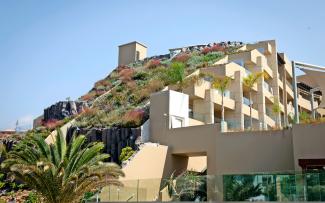 The appearance of the carpet of flowers that is the steep roof vegetation will change depending on the season. © ZinCo GmbH / Impermeabilizaciones Machado, S.L.U. 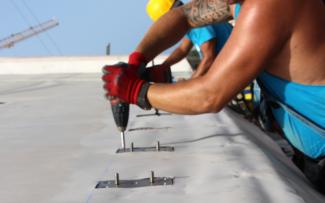 The first step involved the professional installation and sealing of Shear-Fix LF 300 onto the base that is the root-resistant roof waterproof membrane. © ZinCo GmbH / Impermeabilizaciones Machado, S.L.U. 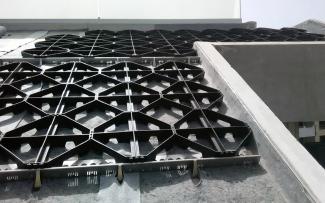 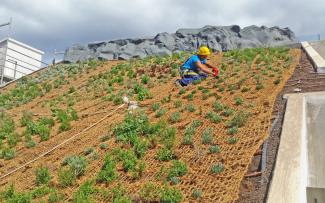 Before the plants are set, the substrate is secured with nets made of coconut fibres. © ZinCo GmbH / Impermeabilizaciones Machado, S.L.U. 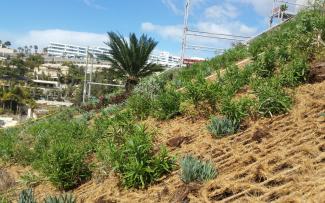 During the growing phase, good irrigation ensures that any gaps in the vegetation are soon closed. © ZinCo GmbH / Impermeabilizaciones Machado, S.L.U. 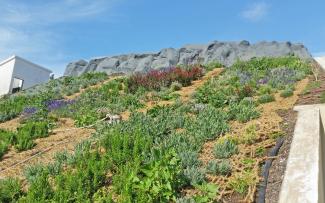 The 5-star luxury GD Victoria Hotel by the Grupo Fedola on the Costa Adeje is in one of the most prestigious tourist regions of Tenerife and is spectacularly impressive with its 1000 m² of steep pitched green roof – among the steepest of its kind in Europe. Colourful, droughtresistant flowering plants rise up on both sides of the building and along all seven storeys. As this project is having such an impact on the entire green roof world far beyond the Canary Islands, it has received the “Green Roof Influencer” award.

It is a five-minute walk to the strand from the GF Victoria Hotel, which is named after its managing director, Victoria López, and was designed by the architects Javier Álvarez and Silvia de Miguel. The hotel speaks the language of extravagance, both inside and out: 242 luxury suites with terraces and a sea view, in addition to exclusive wellness and spa areas both indoors and on the expansive roof terrace. Green roof areas play a vital role in the overall architecture and are a true testimony to the ecological focus of the building.

The ZinCo system build-up “Steep Pitched Green Roof” with Georaster® is perfect for steep roofs with a pitch of up to 35°. Given that some of the roof pitches in the GF Victoria Hotel are even steeper than that, more intensive measures were required for shear protection. For this reason, more than 700 ZinCo Shear-Fix LF 300 elements in combination with Eaves Profiles TRP 80 were installed on the root-resistant roof waterproof membrane. In this way, dense rows of shear barriers were created across the entire width of the roof, and Protection Mat WSM 150 and the Georaster® elements were subsequently installed between them. The Georaster® elements, approx. 54 × 54 cm in size and 10 cm high, are interlocked without the need for tools, and they immediately create a stable structure. Their low volume provides for a comparatively large space for root penetration. The better the root-penetration of the subsequent plants, the lower the risk of erosion.

The Georaster® elements were infilled with a locally produced substrate to a depth of 12 cm. The mineral part of the substrate is lava from the volcanic island of Tenerife and the organic component is a compost mixture of green cuttings and locally occurring mash.

Prior to planting, the substrate layer was secured against wind and water erosion using an organic, biodegradable adhesive in addition to coconut fibre nets. Following this, it is essential to plant as quickly and as farreaching as possible as gaps in the vegetation could in turn mark the start of erosion. Pre-cultivated vegetation mats are generally used for greening steep pitched roofs. In this case we chose the planting option. A welldeveloped root system and a particularly high plant density were important for planting. Mainly endemic plants were chosen, that is to say, plant types that are indigenous to the Canary Islands and that are best adapted to the climate there. Plants from other warm regions were also used, all of which are heat-resistant and require less water. Two synchronised irrigation systems with driplines in conjunction with the ZinCo Protection Mat WSM 150 provide not only for a perfect supply of water but also the lowest possible level of water consumption.

The steep pitched green roofs are in full bloom, lending the GF Victoria Hotel a unique and striking appearance. This is the result of the committed collaboration of everyone involved in the project in meeting the significant technical challenges posed by greening the steep pitched roofs of the hotel. For this reason, Gerardo Machado, Managing Director of the contractors, Impermeabilizaciones Machado, S.L.U., was awarded the “Green Roof Influencer” prize.